The impact of climate change on the Peruvians

Editie 23 - Water > The impact of climate change on the Peruvians

The impact of climate change on the Peruvians

Peru is one of the countries that will be hardest hit by climate change in the coming decades (Bates et al., 2008, p. 103). This is mainly due to its vulnerability as a developing country and its high dependence on glaciers as a source of water. In the last 35 years, a retreat of 22% of the glaciers’ total area has been observed in Peru (Mark and Seltzer, 2003; Vásquez, 2004). As a consequence of an increase in the temperature, the retreat of glaciers is accelerating, which will very likely cause the disappearance of glaciers in the coming decades (Magrin et al., 2007). Based on the significant decline in water resources, Peru has been ranked third on a global index for climate related hazards (Brooks and Adger, 2003; UNFCCC, 2007).

This article will discuss the impact of climate change on water availability in the research area and will assess how vulnerable the local population is to water shortages. The determining factors for this vulnerability will also be discussed. It is a case study of the Ocoña river basin in the south of Peru, where information has been gained by interviewing over 120 local farmers and local governments and experts during two months of fieldwork.

Characteristics of the Ocoña river basin

The Ocoña river basin is located in the south-western part of the Peruvian Andes. It is a rural mountainous area, with a population of around 70,000 inhabitants (AEDES, 2009). This basin is fed by various high elevation glaciers. The research took place in six villages all located at an elevation that varies between 3,000 meters 4,150 above sea level. The prevailing climate at these altitudes is a semi-arid mountain climate, with mean annual temperatures varying between 9°C and 14°C with a yearly precipitation that varies between 124 mm and 305 mm (IRH et al., 2007).

It is a poor region, where the main economic sector is irrigated agriculture. The overall majority of households are subsistence farmers who produce for self-consumption (MDA, 2005). There are some large landowners who produce for the local market. Figure 1 gives an impression of the farmers of the area.

As irrigated agriculture is the main livelihood activity, the amount of water farmers can use for their agricultural production is an important (socio-economic) factor. The irrigation systems used in the area are based on local traditions, which determine how much water each household receives to irrigate its crops. Water rights are inherited from generation to generation and this has been so for several centuries. This has contributed to a very uneven distribution of irrigation water, with few large users, some medium users and many small users. The irrigation systems in the research area are mostly similar in design. Water is derived from the source and led downhill under gravity using a system of canals and dividers to a reservoir. This reservoir controls the amount of water stored and released. From the reservoir smaller canals lead the water to the irrigated parcels (van Diepen, 2009). Each village has a water board, whose responsibility is to organize the water distribution among the different users. Despite the similar design of the irrigation systems, the method used for water distribution differs per village. The main difference between villages is the measure used for the water quantity users receive, for example in some villages it is measured in days a month and in other villages it is based on the number of hectares owned. The main sources of irrigation water are rivers and springs, which are both expected to be fed by melt water from the glaciers, and will thus be affected by climate change. 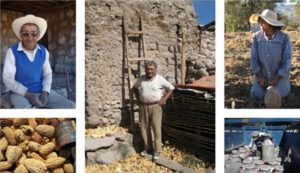 It is already noticeable that climate change is affecting the water availability in the Ocoña river basin. It has been observed that the total volume of the glaciers in the area has decreased by 54% in the last 48 years (Silverio, 2005). The melting of the glaciers has disastrous effects on the water availability in the Ocoña, which will be further worsened by a change in precipitation patterns, which is also the effect of climate change. The increased water scarcity in the research area will have a severe impact on the agricultural production and the food security in the area. Particularly, subsistence farmers are at high risk in the short term (Magrin et al., 2007). Households will be struggling more and more to meet their basic needs, since they have very limited capacity to cope with climate change and its impacts (Douma and Hirsch, 2007, p. 16). But which households will be the most vulnerable to these changes?

Results on the community level

In order to examine what determines the vulnerability on the community level we did research in two areas with considerable differences in water availability, namely the Chorunga and Arma-Chichas sub-basins. The results of the research show that the sub-basins present significant variation in the vulnerability to water shortages, with vulnerability scores of, respectively, 0.24 and 0.15. The different scores can be explained by the difference in water availability. The Chorunga sub-basin has a severe dry zone, while the Arma-Chichas sub-basin has abundant surface water. As a consequence, the respondents in the Chorunga are more exposed to water shortages and have faced the impacts of droughts on their agricultural production. Respondents in the Chorunga sub-basin all perceive to be very sensitive to water shortages, this in comparison with the Arma-Chichas sub-basin where people are less sensitive to this hazard.

Within the analyzed villages in the Chorunga sub-basin differences have been found. The vulnerability ratio varies from 0.22 to 0.25. Since the physiological characteristics and social circumstances of villages in the Chorunga sub-basin are similar, the results indicate that the efficiency of the irrigation and the water distribution could be considered as influencing factors, since the efficiency of the irrigation system can cause a different exposure to water shortages.

Results on a household level

On a household level a more quantitative analysis has been done to understand which are the determinants of the vulnerability to water shortages. Eight possible determinants have been analyzed by using the Spearman rank correlation coefficient. The results are presented in the table below, which shows that four of these factors exhibit a strong correlation with the vulnerability, namely income, education, economic situation and the area irrigated land owned by the respondents. This means that these determinants significantly contributed to the vulnerability score. 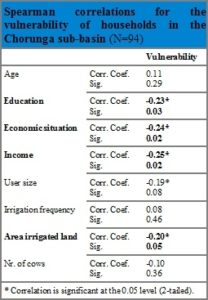 The table in figure 2 shows that all significant correlations are negative, what means that income, economic situation, education and area irrigated land present an inverse relation with vulnerability. A low education indicates a high vulnerability to water shortages while a high education indicates a low vulnerability and so on. Because of the characteristics of the research area, it is possible to conclude that the distribution of irrigation water is the key determinant for the vulnerability of households. This because water rights in the area are fixed and consequently the amount of irrigation water owned cannot be changed. Therefore water can be considered as the independent variable, which influences the other socio-economic factors. This relationship is illustrated in Figure 3.

The identification of the determining factors has enhanced understanding in how the impacts of climate change will be distributed among the population and how vulnerability to water shortages could be reduced. The distribution of irrigation water as main determinant states that the people who have access to very little water are the ones most vulnerable to climate change and they will thus be the first to be at risk. That is why adaptive policy in the Ocoña river basin should focus on these people first. To reduce this vulnerability, improvements of water related practices are the most important strategy. Increasing the storage of water could make communities less dependent on glacier melt. Other measures could be to improve the irrigation system, to change the water distribution and to use more efficient irrigation techniques.

In order to enhance understanding in how the impacts of climate change on water availability will be distributed among the population of the Ocoña river basin we have tried to identify the determinants for vulnerability to water shortages.

On communal level it is possible to state that the water availability in the area is an important indicator for vulnerability. The Chorunga sub-basin has proved to be more vulnerable to water shortages compared to the Arma-Chichas sub-basin, where there is an abundance of surface water. Levels of vulnerability also vary among villages. These can possibly be explained by the efficiency of their irrigation system and the water distribution. On a household level, the results showed that four factors are significantly correlated to vulnerability. These are income, economic situation, education, and area irrigated land. The characteristics of the research area allow us to conclude that the distribution of irrigation water is the key determinant for the vulnerability of households, since it is the only independent factor which in turn influences the other determining factors.

Douma, A. and D. Hirsch, Adapting to climate change: How local experience can shape the debate, Amsterdam, 2007, http://www.bothends.nl/uploaded_files/bp-adapting_to_climate_change-0708.pdf (12 February 2010).