How Social Media Affected the News 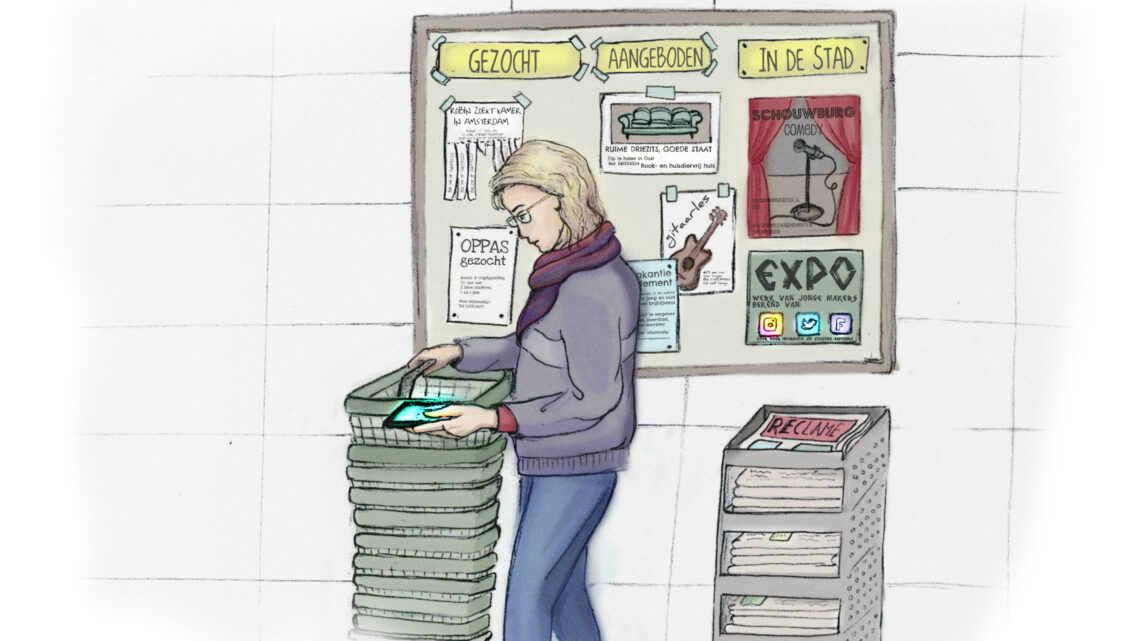 How Social Media Affected the News

Back in the day, the news got delivered right to your doorstep, in the form of a paper copy, imprinted with black ink. If you did not have a subscription you would have to walk to the closest newsstand – a compact booth filled with the latest scoops. That is where you would have to wait in line to read the news. Nowadays, these newsstands are considered to be relics. Today we switch on our phones to see what is happening anywhere in the world. With the use of a simple swipe.

Of course, the physical newspaper has not gone extinct. But while the audiences of traditional news sources (e.g. TV, radio, print) are declining, online news consumption is filling up the gap. 69% of the EU population now consume their news online.1 And to gather the news, social media has become the most important route. More than half of the adult US population uses social media regularly to consume the news.2

When social media platforms first popped up it was seen as a blessing by the newspaper industry. Facing a fast decline in newspaper subscriptions, social media offered a solution. While the audience of the traditional news sources was typically old-fashioned (and still is), the users of social media consisted of a much younger audience. Social media thus offered a whole new market to explore, an entirely new audience to bind.

The promise of this increased reach was not only supposed to be beneficial for the newspapers themselves – in terms of revenue – but also for society at large. The lack of news consumption by the youth was also reflected in the lack of political engagement: the youth no longer found it necessary to vote. By reaching them through social media, their political interest could be revived. And to some extent that is true, social media did serve as a leveller.3 A lack of using traditional news sources amongst the youth was compensated by using social media as a news source, heightening political engagement once again.

But the transition from consuming news through a physical copy to the online one came with a price. Or rather, no price at all.

By spreading the news through social media the news became embedded in a free environment. You do not pay to send a message, nor do you pay to receive one. There is a general perception that using social media is an uncharged activity. And since these platforms are used to obtain the news, this perception also applies to consuming them. Research indicates that social media consumption lowers the willingness to pay for the news.4 Instead of subscribing to an actual newspaper, people now rather subscribe to a newspaper’s Twitter feed.

And of course, it is good considering the lower entry costs of the news. Since those who cannot afford a subscription are able to get informed as well – but when you pay less, you will also receive less in return.

This is not so much reflected in terms of quantity. The news output has even increased substantially. For example, in the UK, the good-old physical newspapers have more than doubled their number of pages in the past decades.5 This is really a matter of quantity over quality. Because on the other side of the fence, the number of journalists who are employed is actually decreasing. The number of US newsroom employees has, for example, decreased from roughly 70 000 to 30 000 in the years 2005 to 2020.6 In an effort to remain profitable, fewer people have to write more stories. This time pressure has caused journalists to be more dependent on press agencies (PA) – e.g., AP, Reuters, etc. – and public relations (PR) sources. Thus, more than half of the produced stories are either fully or partly dependent on such sources.6 In addition, journalists now have less time to check and validate stories, making them tracing back to PA & PR sources often mere copies.

Perhaps more people are reached now than ever, but is it worth it when the quality of the news is decreasing? That being said, although social media did give rise to the perception that news consumption is uncharged, it is not the only cause of the financial struggles of newspapers. Amongst others, high fixed costs and the individualisation of society – which has led to less newspaper loyalty (read: fewer subscriptions) – are important causes as well. Nevertheless, the free apparent culture that social media has transferred to the news has certainly not contributed to the financial situation and therefore the lesser quality of the news.

The news supply has not only increased internally – in terms of output – but also externally; the amount of competitors has risen substantially. For newcomers the digitalisation of society already lowered the costs of producing news and thus, printing costs are no longer a concern.7 In addition, the arrival of social media has increased the ease of distributing the news to the public.

These developments have led to the emergence of ‘new’ news sources. Take, for example, news aggregators – sites such as Yahoo News, Google News, etc. that redistribute existing news content from established news sources, often on the basis of an algorithm.8 Or the recent rise of (daily) podcasts that present and discuss the news.9 As well as the increase of more low-tier news forms such as (micro-)blogs and citizen journalism; forms that often have rather less established journalistic norms.10 Certainly, the last two heavily rely on platforms to distribute their news.

So although social media have increased the possible reach of newspapers, they now have to compete with alternative (online) news sources. The pie might have become bigger, yet more people want a slice of it.

Together, the internal and external increase in the news has led to an abundance of it. The web and the platforms are overloaded with it. This has not only made the audience more uninterested, but it also made them more unmotivated and lazy in their consumption.

Interest in the news is reaching an all-time low. In the UK, for example, those that are very or extremely interested in the news have fallen from 70% to 43% in the years 2015 to 2022.1 One possible cause is the perceived news overload11, to which social media contributes. The more you use social media, the more often you (accidentally) stumble upon the news, eventually making you tired of consuming it.

This tiredness of the news – often referred to by the term news fatigue – also affects people’s reading habits. Namely, they spend less time doing so. Whereas the average visit to one of the top 50 US newspaper sites took 2.5 minutes in 2014, it shrunk to 1.8 minutes in 2020.7

Lastly, the perceived constant exposure to news on your feed makes you stop actively looking for it.12 You expect that the news will find you instead. This so-called ‘news-finds-me-perception’ diminishes what you will actually learn from the news. Research indicates that those that are under the impression that news will find them, gain less political knowledge from consuming the news. In the end, it all boils down to the idea that you learn more when you are inherently motivated to do so.

Apart from bringing a surplus of news, social media has also tainted the name of news. Social media has a bad track record in terms of spreading fake news. For example, a study from 2018 highlighted that tweets which contain falsehoods are 70% more likely to get retweeted compared to truthful tweets.13

And people are not particularly good at distinguishing ‘real’ news from fake news. An experiment from 2018 found that only 17% of the participants were able to detect fake news on social media better than by chance.14 And if real, truthful news gets so easily mixed up with fake news, it will eventually reflect back upon the reputation of news in general.  Just as interest, trust in the news is reaching an all-time low15, and research indicates that using social media to get to the news might be the cause of this increase in general news mistrust.16 The great reputation that the news once had does not exist anymore.

We thus have a public who feels overloaded by the news, is not interested in it anymore, is getting tired of it, is not even motivated to look it up, and if it does consume news, it does not trust what it says. In the end, it could lead to news avoidance: instead of actively engaging with the news, one tries to actively escape it.17 In summary, the start of this negative spiral is caused by our decreasing willingness to pay for the news. A sentiment to which social media has highly contributed. In order to survive, it has forced the newspaper industry to amp up the output at the expense of lesser quality. The consequential overload of social media, taken together with the platform it gave fake news to, has set in motion all kinds of negative outgrowths. The promise of social media has little left.

Avoiding the news is not an option. It is the most important source to enlighten us about the current political environment.18 If the news is not read, how can an informed decision be made during elections? In addition, the news used to establish a common factual ground, for both citizens and politicians.19 A basis of facts that were not debated upon. If parts of society stop consuming the news, we will start to suspect mere facts, making little progress in the actual debate. This paints a picture that perhaps does not sound unfamiliar given recent and current crises (e.g. the pandemic, climate change, Russian invasion, etc.).

How do we stop this negative cycle? Perhaps we should stop taking it for granted to get the news for free. In many welfare states, you are obliged to have health insurance, since we have agreed that our physical and mental health is worth the money. Is getting the news not worth the money, then?

It is understandable that we do not pay for sharing cute pictures of our pets or our latest dinner meal, but getting informed about political events and current crises is something completely different.

Roeland Dubèl (1999) is a second-year Research Master’s student in Communication Science. His interests within the science of communication are in how the digitalisation of our media environment has affected our news consumption patterns, as well as how mediated political content can affect us emotionally. In his eyes, the goal of any science should be to answer as many questions as broadly and profoundly as possible. It is the ground for his passion for interdisciplinary science. Within his study, he loves to apply digital methods from the computational sciences, but he also has an interest in using physiological measurements from psychology and the neurosciences (to measure emotional reactions in specific). It reflects his key idea that one is better able to answer questions when one looks at it interdisciplinary.