The Song of the Humpback Whale

Editie 43 - Muziek > The Song of the Humpback Whale

The Song of the Humpback Whale

During the Soviet Era Cold War, the US Navy stationed engineer Mr. Watlington at Bermuda. He developed systems for detecting the presence of Soviet submarines moving around in the North Atlantic Ocean. The listening device hydrophones, (underwater microphones), played a key part in this detection. One day Watlington recorded unusual noises, these sounds were quite unfamiliar and were coming in with a breathtaking clarity. A few years later, in 1955, Watlington sighted a few whales within fifty feet of the hydrophone. The sounds came in clearer than ever before and at this moment he realized that the humpback whales were the source of these sounds.1

In the 1960s, Watlington handed over his tapes to Dr. Payne and fellow researcher Scott McVay. Dr. Roger Payne, a conservationist, biologist and research zoologist, was beginning to make a name as the great public voice of whale science and whale conservation around the world. Scott McVay studied at Princeton University which had one of the few sonograph machines capable of printing out the details of sound in a form that could help make sense in the organization of the song.2

Although songlike underwater sounds had been known by oceanographers for many years (and indeed, it has been suggested that singing Mediterranean humpbacks are the origin of the Greek myth of sirens singing) these vocalizations were not definitively linked to whales until described by Roger Payne in 1967.3 He released a vinyl called “Songs of the Humpback Whale” and in 1979 National Geographic published 10,5 million magazines that included a flexidisc of “Songs of the Humpback Whale”.

Biomusicology is a relatively new branch of Musicology. In Biomusicology (established by Wallin in 1991) music is studied from an interdisciplinary perspective; scientists are working on the question of what music is and how music evolves. The book The Origins of Music is based on the workshop “The Origins of Music” in 1997 which treated the roots of music and the interaction of biology and culture in music.4

For as long as history, myth, or memory can tell us, human music has been linked with the songs of animals. Animal song appears in human music from a wide variety of time periods and cultures, but the way it is used varies enormously. In cultures where people interact intensively with the natural world, music is often used to communicate with non-human animals, whether for practical, spiritual, playful or other purposes. Music often serves to bridge the gap between humans and non-humans.5

It was once thought that bird song was the only form of animal music and the term “bird song” is used not only by biologists but also by musicologists, this tradition is old (e.g., “bird music” in Scholes, 1938) and continues unbroken until the present day, but the discovery of complex, learned vocalizations in marine mammals invalidated this belief.6

Humpback whales, Megaptera novaeangliae, are found worldwide: along the coastlines of all the continents, around oceanic islands, amidst ice packs in polar seas, and far offshore. They migrate annually from high – latitude summer feeding grounds to subtropical or tropical winter breeding grounds. The route between Alaska and Hawaii is one of the more closely studied routes, where humpbacks have been observed making the 3,000 miles (4,830 km) trip in as few as 36 days. 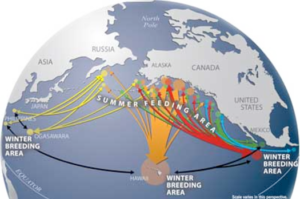 Humpbacks are winter visitors to Hawaii, they seek out warm, relatively shallow waters for mating and birth. Hawaii is the largest breeding ground for this species in the North Pacific.

While all cetaceans are able to emit sound under a variety of conditions, the humpback whale seems unique in the complex diversity of its underwater vocalizations. Humpbacks are one of few creatures who possess vocal learning ability, like humans and songbirds, they learn to make their sounds. Humpback whale songs are one of the most complex acoustic behaviors found among animals. They consist of a sequence of sounds organized in a hierarchic structure, whose components are repeated cyclically in a fixed pattern.7

The song cycles show geographical or “dialectal” variation: the humpback song in Hawaii is quite different from that in Australia and that in the Caribbean is quite different from that in the Mediterranean at any point in time. But songs at each specific population are also rapidly changing, with the peak of change coinciding with the peak of singing in the breeding season.

Intriguingly, there is cultural transmission of the songs in any locale, such that all male whales sing the “same” songs (though perhaps differently arranged, and with minor individual differences) during any period. However, each individual whale sings independently, and there is no evidence of synchronous chorusing, call and response synchronization, or other similar phenomena. The process of variation and geographical exchange in singing, thus, follows the same rules of the folk songs of oral traditions. Each community has its own repertoire, but this latter is flexible and mixable with others, up to not only including new songs, but also to providing more or less evident modifications of the old ones.8

Singing whales are found with their head down some 50-75 feet (15m-22m) below the surface. With the eyes closed and their tail pointed skyward, they remained motionless save for the slow movement of their pectoral fins forward and back, looking much like opera singers swinging their arms to help hit those high and low notes. In 1979, researchers discovered this particular use of the “big wings” when singing, humpbacks would move their fins in rhythm with phrases of the song.9

The humpback whale song is a series of sounds that typically lasts 10 –15 minutes and is repeated over and over.

The song consists of several different themes (often four to six) sung in a continuous loop. Each theme is composed of sound units. If the song has four themes the whale will sing themes 1-2-3-4, usually surface to breathe, then dive and begin theme 1 again. A song session (that is, continuous singing) can last for hours.

Here the themes (composed as above) are given different colors. All singers in the population follow the same pattern of theme composition and progression. Even the amount of time spent on one theme is similar. During this period (Jan. 2005), about 70 percent of the Hawaii song consisted of theme 3 (yellow).10

Our understanding of the biology of whale song lags far behind the study of bird song, partly for historical reasons, and partly for purely practical reasons (humpback whales cannot be raised in the laboratory, and oceanic field conditions limit observation and experimentation).11

Decades of research on whale song has been done by biologists but not yet by musicologists. The central focus of my research is studying the whale song from a musicological point of view. For this reason, I have been studying humpback whales since 2009 in Maui, Hawaii. In 2013, I did research under the supervision of the biologist Dr. Jim Darling, world well-known whale song researcher, who has worked in many parts of the world, and according to him Hawaii really is one of best places in the world to study whales.

Whale songs are usually analyzed using bioacoustics software programs that create spectrographs. I used the program PRAAT, designed by Paul Boersma and David Weenink from Phonetic Sciences of the University of Amsterdam, to analyze whale songs with greater precision than has been done previously. PRAAT can analyze, synthesize, and manipulate speech.12 The program has been made for linguistics; however, it’s a very important tool to get a better idea of the melodic contours of the song and for measuring the duration of the rhythm.

Whales use many of the same laws of composition in their songs as, we humans use in ours. Human song and whale song are strikingly similar in many basic ways. The experience with the singing whale in the water was the most beautiful experience I ever had and it was very important for my view on the whale song. Instead of only using my ears, I got a full body experience. As the soundwaves went through my whole body, the only thing I felt was pure emotion.

Jim Darling from Whaletrust, Maui, graciously provided the figures to illustrate the structure and the session of the whalesong. The migration data has been kindly provided by Hawaiian Islands Humpback Whale National Marine Sanctuary

5 Emily Doolittle, ‘Crickets in the concert hall: A history of animals in western music,’ Transcultural Music Review 12, (2008a): 1.