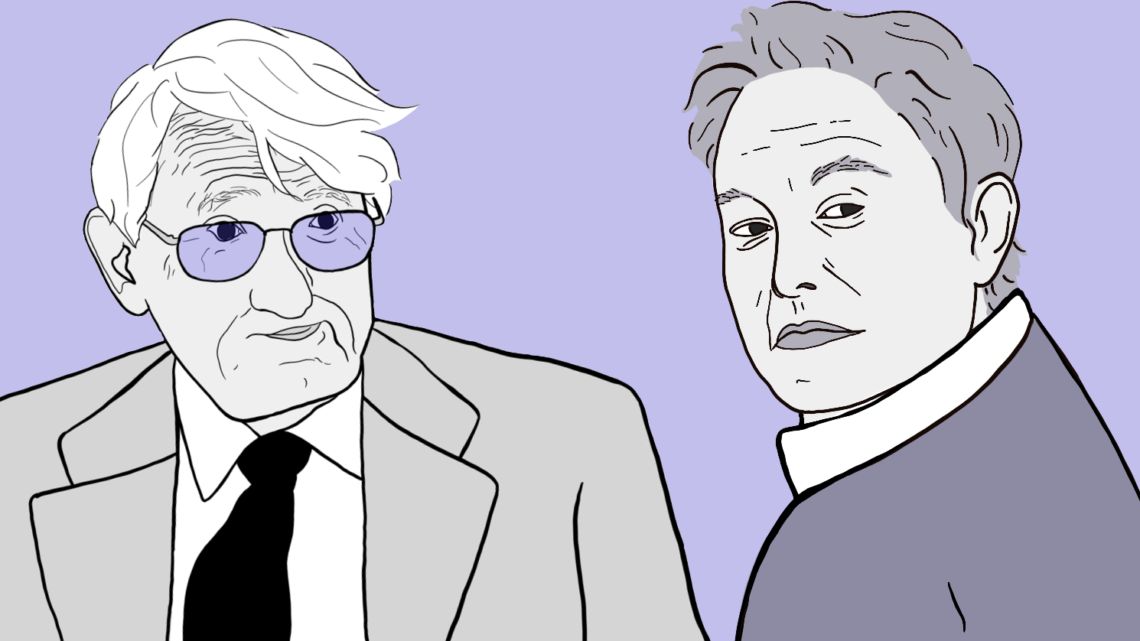 My own generation* has long stopped using Facebook and has instead migrated to Instagram, TikTok, and Twitter (which, alas, is also dying). Yet, most of us all too well know the heated discussions that one uncle would get into in the comment sections of local news outlets and under the posts of C-class celebrities. When we log in to our Facebook account once per year to look up an old classmate or to reply to our birthday messages we might get a glimpse at one of these arguments, roll our eyes, and quickly log off again.

Social media has given everyone a voice and a platform to share it, or at least this is how we used to think of these platforms in their early days. According to this optimistic vision, social media platforms could become public spheres in which people of various backgrounds freely lead political debates and develop political discourse.  But somewhere between our archetypal uncle reposting conspiracy theories about chemtrails and Facebook repeatedly breaking EU data protection laws,[i] this vision seems to have died down faster than it could really gain a footing.

This article will examine whether social media platforms can be said to have given rise to digital public spheres and how free and participatory public discourse is both enabled and restricted by the current state of the internet and platform capitalism.

What is the public sphere?

The term public sphere in the field of media studies originates from the works of German philosopher Jürgen Habermas. Habermas imagined the public sphere as an open space for public civic deliberation and the development of political opinions and discourse, mediating between the spheres of the state or politics, culture and the economy.[ii] According to Habermas, the public sphere does not need to take the shape of a physical space, as it did in the case of the coffee houses of 18th century England, but in its more abstract form also includes media such as newspapers which are instrumental in shaping public opinion.[iii] Further, according to Habermas’ traditional theory of the public sphere, inequalities in status, wealth and power should be „bracketed“ out by participants in the public sphere to enable a truly equal and open dialogue.[iv]

In her seminal critique of the Habermasian public sphere, critical theorist and philosopher Nancy Fraser questioned Habermas’ ideal type, open public sphere, both in terms of its historical accuracy and its conceptual usefulness.[v] Fraser contends that access to the public sphere, and thereby to the involvement in political dialogue and public life, has always been limited for a large part of the population, through both formal exclusion and informal marginalization.v Informal marginalization is driven by the emergence of discriminatory and elitist discursive practices and perpetuated by the strict distinction between private and public concerns which Habermas echoes in his original theory of the public sphere.v The exclusion from the public sphere of matters deemed “private” in a certain historic and cultural context can lead to the further marginalisation of already neglected issues such as domestic violence, which was long ignored in male-dominated public discourse.v A critical theory approach therefore needs to be mindful of the power dynamics that produce and are in turn reproduced by the institutional and discursive dynamics of the public sphere.v According to Fraser, acknowledging social inequalities, rather than trying to „bracket“ them is a first step towards achieving greater discursive, and ultimately material, equality. v

With the advent of the internet and the popularization of social media sites over the past years some commentators expressed hope that these new technologies could provide a more barrier-free and egalitarian access to participation in a new form of digital public sphere. Social media sites not only enable the fast and relatively barrier-free spread of information and transmission of private communications but provide a platform to individuals and civil society groups to actively create, share and comment on online content, relating both to private interests, as well as political debates.

Further, the potential democratising effect of social media platforms through a more open and democratic form of online discourse was widely discussed and praised during the uprisings in the “Middle East” and Northern Africa during the 2010s, coining the term of “Twitter and Facebook revolutions”.ii However, this positive perception of social media as aiding the creation of critical and participatory publics has not gone unchallenged. The following sections will consider three criticisms of the optimistic early-day vision of social media platforms as means of political emancipation.

“Governments of the Industrial World, you weary giants of flesh and steel, I come from Cyberspace, the new home of Mind. On behalf of the future, I ask you of the past to leave us alone. You are not welcome among us. You have no sovereignty where we gather.”[vi]

These were the words with which US-American poet, essayist and self-described cyberlibertarian John Perry Barlow described his utopian vision of an independent, decentralised internet in 1992.

In the early years of the internet, Barlow and many others optimistically claimed it as an open space for free speech and expression. However, state surveillance and censorship are real and in the case of the former, at the latest since the 2013 Wiki Leaks scandal around the NSA’s PRISM program, a well-known threat to these freedoms.[vii]

Governments have started to make frequent use of the vast databases of Social Media Platforms in the name of national security. This not only compromises the privacy of hundreds of thousands of users in the process but in various cases also serves to silence critical voices and imprison political opponents. While tourists from Western Europe can spend their summer vacation relaxing on the sunny beaches of Turkey, dozens of Turkish and Kurdish individuals have been detained or imprisoned for sharing or liking posts deemed critical of the government and president, or related to the PKK.[viii] Liking a post on Facebook might seem the most inconsequential of acts in the moment, but in a world in which nothing we do on the internet is ever truly private, it might well come back to haunt us many years later.

Even where social media platforms are not outright banned, government surveillance might thus prompt users to self-censor. Unlike in Habermas’ ideal model of the public sphere, we cannot “bracket out” something as real as a government agency collecting and storing our data and keeping tabs on any critical voices.

Critics have pointed out that similar to the traditional physical public sphere, the digital public sphere is not free of the structures of power and oppression of private ownership which restrict access to and participation in the digital public sphere. Namely, most large social media platforms are owned and run by for-profit corporations that make earnings through the commodification of user data.ii Designed to create a profit by selling user data to advertising partners rather than enabling open political discourse, social media algorithms thus aid the creation of “bubbles”. Algorithmic bubbles maximise the time users spend on social media platforms but lower their chances of being exposed to opposing political views or topics outside their established spheres of interest.[ix]

Beyond the profit-driven model of advertising and content-curation on social media, some users have actively started monetising their online presence themselves through various means. While many influencers openly advertise beauty or tech products to their audiences, in some cases the optics of grassroots activism and social justice have been clandestinely coopted to profit from the political momentum created by online communities.

One of the most prominent and widely criticised examples of this marketing via activist aesthetics is the Instagram page @feminist. The page currently sits at over 6 million followers and regularly posts colourful infographics on social justice-related topics, as well as reposts from smaller creators. Rather than a simple grassroots page about gender equality, @feminism was set up for the greater purpose of promoting its two male owners’ clothing brand, as revealed in 2020.[x] In addition to disguising the promotion of their own business, the men behind @feminist also reposted content from smaller accounts without the creators’ consent and purposely mislead users by pretending to be women running the account.x

Following the reveal of the page’s owners and undisclosed advertising practices and the resulting public backlash, around 2,000 posts were deleted from the page and management was transferred to a new team.x However, it is unlikely that @feminist was the only case of grassroots optics being used for profit on social media, despite creating the biggest outrage at the time.x

This example shows that while (almost) everyone can post online, some of us are more easily able to profit from our (and other people’s) content. Further, where for-profit businesses are disguised as grassroots activist accounts, attempts at a genuine political debate are easily coopted and steered by people with little to no interest in honest discourse.

The digital public sphere: More than an academic hypothesis?

It has been put into question whether the digital public sphere is a lived reality for users or if it remains, first and foremost, limited to the realms of academic discourse. The limited investigations into this question have yielded mixed results, showing that users’ perception of their engagement as private or public depended both on the platform used, as well as on various demographic characteristics, such as gender and age.[xi] While many of us consume political content on social media at least occasionally, most of us do not produce it.xi And some of us might have experienced this ourselves: Even during the height of the first COVID-lockdown, when many of us could observe some distant family members turning into medical and political experts on Facebook seemingly overnight, their posts often started out somewhere along the lines of “Not to get political, but …”

Social media might be where many of us consume our news and share pastel-coloured infographics, but many users still do not perceive their online behaviour as inherently public or political. Nevertheless, there is no denying that platforms are inextricably linked to modern-day politics and that the current model of privately owned, for-profit social media platforms is influencing our habits of news consumption and political discourse, as well as limiting the parameters within which such discourse is allowed to take place.

The idea of the internet as a tool for emancipatory discourse and a catalyst for social change should perhaps not be discarded entirely, especially since social media platforms such as Twitter and Instagram remain a crucial means of mobilisation for political and activist groups. And as the recent mass exodus of Twitter users to alternative sites such as Mastodon has shown, users are not oblivious to the politics behind the platforms they use.[xii] Many will not quietly accept drastic changes in content moderation, the censorship of critical voices and the mass-layoff of workers by the company behind the platform, thus making political choices when deciding on which social media sites to use.[xii]

Creating further awareness towards the structural discursive inequalities on social media platforms will be crucial for opening up a conversation about alternative visions of an internet beyond platform capitalism and a more open and accessible digital public sphere.

* Which is either Gen Z or Millenials, depending on who you ask

[x] “How the Businessmen behind @Chnge Fake Feminism for Profit.” Medium, December 31, 2022. https://medium.com/instasleuth/how-the-businessmen-behind-chnge-fake-feminism-for-profit-bf0689adc26f.

Rena Eliz Hänel is a Masters student in International Trade and Investment Law and holds a BA in European studies, with majors in European Law and East European Studies (UvA). Before moving to the Netherlands, she lived and studied in Germany, the Czech Republic and Bosnia and Herzegovina. In her studies and writing Rena is interested in exploring nature- and community-centred approaches to law and visions of economic organisation beyond growth and extractivism. Her greatest non-academic passions include baking and horror movies. At Inter Rena acts as co-editor-in-chief, as well as writing editor and occasional illustrator.