In the early thirties of the 20th century, Fritz Zwicky inferred the existence of a mysterious form of matter not emitting light: the dark matter. 1 In the sixties and seventies, more and more robust evidence for the existence of an unseen form of matter accumulated thanks, in particular, to the work of Vera Rubin. 2 In more recent years, detailed astronomical observations confirmed this picture with a very high degree of precision. However, while more than eighty years passed since the early work by Zwicky, we still do not know much about this mysterious form of matter. So, what do we mean when we talk about dark matter? 3What we do knowIn the Universe, we observe the effects of gravity due to something that we do not see. We cannot observe this directly with our eyes or a telescope because it does not emit light, i.e., it does not interact electromagnetically. This sounds very mysterious. However, this is similar to how astronomers in the past centuries used to infer the presence of planets beyond the reach of their “primitive” telescopes. To give an example, imagine that the planet Jupiter did not emit any kind of light, or, more correctly, did not reflect the light from our Sun. We would not be able to see it, but we would conclude that it is there just by studying the motion of the other planets of the Solar system. This is exactly how we investigate dark matter. We cannot see it, but we do observe a number of gravitational effects in the Universe that suggest its presence.The first evidence came from the study of the motion of stars in galaxies, and the motion of galaxies in clusters of galaxies. Astrophysicists noted that these motions could not be easily explained by simple gravitational arguments. For example, we would expect that the velocity of stars decreases as the square root of radius moving away from the centre of a galaxy. However, this does not happen, instead it remains constant. This is explained by the presence of some sort of invisible matter permeating the galaxy up to farther out from its centre than the visible matter, therefore allowing the velocity of stars to remain constant.There is strong proof for the existence of dark matter, based on different lines of evidence. I will further explain two of my all-time favourites: colliding clusters of galaxies, and the cosmic microwave background.Clusters of galaxies are a bunch of galaxies held together by gravity, and the space between them is filled with a very hot gas. A famous cluster of galaxies is the so-called “Bullet” cluster, a system constituted by a main cluster being hit by a smaller one: the bullet (see Figure 1). 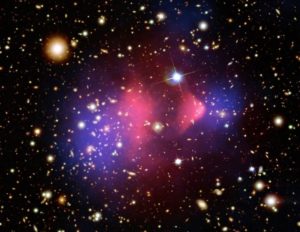 Figure 1.bron: NASAAstrophysicists measured the total matter distribution of the “Bullet” cluster, using two different methods. The first method employs the X-ray light emitted by the cluster’s gas, which tells us how the gas itself is distributed. The second method is based on a phenomenon described by Einstein, the so-called gravitational lensing: a light ray from a given source is deflected from its path toward us by the matter present along the way. The gas was thought to represent most of the mass of such a system; however, the two methods gave very different results. While the visible matter traced by the X-ray emitting gas shows a certain distribution, the total (galaxies, gas and dark) matter of the system measured via gravitational lensing shows a very different one, implying the existence of a dark matter component. 4Another piece of very important evidence for the existence of dark matter comes from the observation of the so-called Cosmic Microwave Background: a radiation coming from the entire Universe that is remarkably similar in all directions. 5. The very small differences in the temperature of this radiation – a factor of 1 over 100.000 – trace the differences in the primordial matter distribution (see Figure 2). In other words, the Cosmic Microwave Background tells us how the matter was distributed before any structure – stars, planets, galaxies, and so on – actually formed. 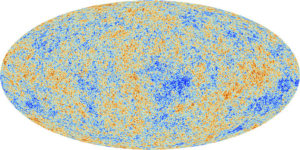 Figure 2.bron: ESAAt some point, this nearly uniform matter distribution started collapsing around the locations with the highest density, triggering the formation of structures. If all matter in the Universe were merely light-emitting matter, this formation process would have been too slow to develop all the structures that we observe nowadays. A “catalyst” for the gravitational attraction during structure formation is needed to make the whole process faster, and the dark matter is that catalyst.These are some of the reasons why we are so confident that dark matter is out there. However, it remains “covered in secrecy” on other levels.What we do not knowTo be fair, we do not know much else about dark matter itself. We know that it is out there, and we can measure its distribution. We know that it does not emit light, and how much there should be with respect to normal matter, about 80%. Consider this; we do not know what 80% of the matter in the Universe is made of!The commonly accepted scenario is that dark matter is made of some sort of – yet unknown – particle that does not interact electromagnetically and therefore does not emit light. We do not know if dark matter is made of only one or several of such particles. Following Occam’s razor, which tells us that when confronted with different hypothesis we should select the one with the fewest assumptions, our working hypothesis is that dark matter is made of one kind of particle. Under such assumption, we can infer some of the characteristics that this particle should have. For example, we can estimate its mass and its velocity to allow for a “correct” structure formation process.

In this context, the most studied particles are the so-called weakly interacting massive particles, a hypothetical group of particles not described in the Standard Model of Particles. We search for these particles with several techniques both on Earth and in Space. For example, we hope to gain some indications from the Large Hadron Collider in Geneva. We search for them directly, looking at possible weak interactions with normal matter in underground experiments. Finally, we also try to detect them indirectly, looking for possible products of its annihilation or decay, from places in Space where we know that dark matter is abundant. For this, we use both satellites and ground-based instruments. This is a very lively and exciting field of research, but it is very hard too. It is difficult to search for something, when you do not really know what you are searching for.Alternative theories invoke a modification of the laws of gravity, rather than yet unknown particles. So-called modified gravity theories try to explain the dark-matter-related effects that we observe mainly as result of modifications of gravity, that is gravity should be different in different places in the Universe. While the hypothesis that dark matter is a particle of some sort is the most commonly accepted hypothesis by the scientific community, there are growing attempts to understand whether modifications of gravity exist and how we can detect them.What we doAs mentioned before, we search for dark matter in different ways, either by looking for possible weak interactions of the dark matter particle with normal matter or for possible products of dark matter annihilation or decay.As dark matter might interact weakly with normal matter, if it interacts at all, our detectors need to use a large “piece” of material if we want to see the possible interactions with dark matter. Additionally, all kind of particles can interact with this material, and therefore we have to screen our experiment from this “noise”. An example is the XENON1T experiment that has been recently inaugurated in the underground laboratory at Gran Sasso in Italy. The Gran Sasso laboratory is located under a mountain that is indeed used as a natural screener for the “noise”. This exciting research is executed in collaboration with the National Institute for Subatomic Physics (Nikhef) in Amsterdam.Another example is the planned Cherenkov Telescope Array (CTA), a large international collaboration – with Dutch participation led by the University of Amsterdam – which is planning to build about a hundred telescopes in two different sites in the southern and northern hemisphere. This array of telescopes will be looking at photons of the highest energies, so-called gamma rays. In several models, the products of the particle dark matter annihilation or decay can generate very specific gamma-ray signals. CTA will be looking for such signals, for example from the centre of our own Galaxy where we know a large concentration of dark matter is present.In the last couple of decades, there have been numerous experimental efforts aimed at detecting the dark matter particle and to understand its basic nature. However, so far, we have been able only to put constraints on several models. Therefore, we need to go a step further with the next generation of instruments in the hope to shed some light on the mystery of dark matter. Hopefully, the future will be bright for the dark side of the Universe.