Living with a cancer patient: a partner’s perspective

Living with a cancer patient: a partner’s perspective

The ways in which people experience and cope with an illness is an interesting topic worth researching. Insights into illness experiences and coping strategies lead to a better understanding of how people give meaning to health and illness. Even more important, this kind of research highlights what people exactly go through and from what kinds of support they might benefit the most. When looking at illness experiences the most obvious is to examine those of patients. But what about the people in their direct surroundings? Although their bodies are not directly affected, their lives certainly are. Knowledge about the experiences of partners may be particularly useful concerning the so-called participation society and current reforms in health care, which lead to greater responsibilities put on the shoulders of the inner circle of sick people. In this article, I provide a fresh perspective at the situation of ill people by focussing on their direct surroundings: their partner. I will explain that the concept of uncertainty is at the core of partner’s experiences, and how they make sense of their new lives by applying coping mechanisms.Medical anthropologyBefore diving into the experiences and coping mechanisms of partners, however, it is helpful to take a look at what medical anthropology exactly is. Anthropology in general aims at uncovering hidden structural tendencies in cultures or phenomenon’s that are taken for granted by the people native to this culture. Knowing more about the underlying structures of a particular situation or phenomenon is useful for understanding how the situation might have arisen, and therefore how it can be dealt with. These larger structures are usually locally investigated using qualitative methods as interviews, case studies and participant observation. The subfield of medical anthropology focuses especially on issues concerning health and illness.During the last decades, an increasing desire has developed in both anthropology and medicine to vocalize the undervalued experiences of people dealing with illness in some way (Green & Thorogood, 2014). Nowadays, it is recognized that Narrative Theory (largely developed in and later borrowed from literary theory) is particularly suitable when examining these unnoticed experiences of illness. This theory states that we tell our social environment and ourselves a particular story or narrative about whom we are, through which we are constructing a meaningful identity (Ezzy, 1998, 2000). Our stories are based on our experiences in life, serve as a blue print for the way we experience the present, and determine our outlook on the future. When we gather new experiences, we gradually adapt our story, to a greater or to a lesser extent. However, when something serious or bad happens (e.g. you or your partner turns out to be terminally ill) the story you used to tell about yourself, your life, and your future does not fit with this new present situation you suddenly have to deal with. You are forced to make sense of this sudden disruption and to adapt your whole story to cope with the new situation that gives rise to many uncertainties.A partner’s narrativeThe way in which partners of cancer patients told and adapted their stories of themselves, their lives, and thus their identities, was what I investigated for my Master thesis in Medical Anthropology and Sociology. What did these partners actually experience? Far and foremost, the concept of uncertainty became invasively present in their lives. Partners first of all told about the shock when hearing the diagnosis. After that, the uncertain outcome of the disease and treatment of their ill partner and the sudden proximity of death caused profound changes in everyday life. For example, partners were forced to take over responsibilities in areas as finances, childcare and everyday practicalities. Furthermore, as the patient often became dependent on the care of the partner, the (balance of the) love relationship inevitably changed. The illness thereby influenced the experience of intimacy and sexuality in the relationship. Partners also spoke of what it meant to be ‘a good partner’ in times of sickness. Many were confronted with implicit norms about, for example, the extent to which they should care for the patient, and to what extent they were ‘allowed’ to think of themselves. In other words: partners experienced much uncertainty due to the profound changes in their lives and their identity. In medical anthropology the experiences of the partners would be referred to as a so-called biographical disruption (Bury, 1982). This concept refers to the disruptive effect of an illness on someone’s life.

So, how did the partners cope with this disruptive experience of uncertainty? As discussed above, narrative theory states that, while constructing a narrative about one’s life, people make sense of new experiences. Because partners had to deal with a sudden disruption of their life, they had to adapt their narrative to a great extent. In the research, partners talked about their experiences in roughly three ways (Frank, 2013). In these three different narratives, partners also showed which kinds of coping strategies they did or did not apply to reduce the sense of uncertainty. As illustrated in figure 1, the concepts of biographical disruption, the (un)ability to apply coping strategies, the kind of narrative partners used, and the extent to which they experienced uncertainty turned out to be connected. 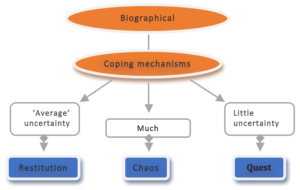 Figure 1: Linking the conceptsLearning one’s partner has cancer generally leads to a disruption of life and the experience of uncertainty. Dealing with this disruption and uncertainty through coping mechanisms leads to a certain degree of uncertainty. All these aspects, together with the specific situation of a partner, are reflected in the kind of narrative partners use to give meaning to their situation.Partners using the first narrative, restitution, were focused on the recovery of their sick partner. They mostly talked about the features of the illness and treatment, and targeted all their energy at contributing to the recovery through the practice of care and trusting biomedical health care and its doctors. This narrative and its focus on restitution was thus aimed at getting things back to the way they normally were. Partners using the second narrative spoke of their experience in a more chaotic way. These people experienced mainly despair and depression due to their inability to make any sense of the sudden increased uncertainty in their lives. They were unable to apply any coping mechanism in such a way that uncertainty was reduced. The third kind of narrative used by partners was that of quest. Those partners were searching for ways to use their experiences as a lesson to learn from, to enjoy life more. They used coping mechanisms such as hope and faith to create a positive outlook on the future, and tried to incorporate uncertainty as a part of life by accepting it.Partners of cancer patients thus experienced the diagnosis of cancer as a disruption of their lives and identity. The combination of coping mechanisms and the specific situation of a participant was reflected in the way they spoke about their experiences and the meaning they allocated to them. Partners adapted their life story and their identity to deal with the uncertainty caused by the illness of their partner. The kind of narrative and coping mechanisms thus proved to be associated with a certain level of uncertainty (see figure 1). Insights into the experiences and coping mechanisms of partners are useful in the light of the current changes in the Dutch health care system. These changes, with the emphasis on self-reliance, participating with society, and resilience of (the social inner circle of) patients, sometimes contribute to a heightened burden and sense of responsibility. The role of a carer, validated by social norms and internalised by partners, may be experienced as a burden (Frank, 2013). It is important to be aware of the effects of these ubiquitous narratives. In other words: which implicit social norms about the role of the partner they create.